You are here: Home / Sermons / Will everything be okay in the end? (Tales of outrageous kindness)

The Parable of the Good Samaritan is one of the first scriptural ‘repeats’ (previous sermon here) among the sermon blog posts on this website. On this occasion, Rev. Geoff McKee reframes the lawyer’s question to Jesus: ‘What must I do to inherit eternal life?’ – which prompts Jesus to tell the story of the Good Samaritan – for a modern audience: “Please tell me it will all be okay in the end?”

Yes, it will all be okay but there is important action we have to take as Christians, which Geoff explains.

Luke 10:25-37 (New International Version)
The Parable of the Good Samaritan
25 On one occasion an expert in the law stood up to test Jesus. “Teacher,” he asked, “what must I do to inherit eternal life?”

28 “You have answered correctly,” Jesus replied. “Do this and you will live.”

29 But he wanted to justify himself, so he asked Jesus, “And who is my neighbour?”

30 In reply Jesus said: “A man was going down from Jerusalem to Jericho, when he was attacked by robbers. They stripped him of his clothes, beat him and went away, leaving him half dead. 31 A priest happened to be going down the same road, and when he saw the man, he passed by on the other side. 32 So too, a Levite, when he came to the place and saw him, passed by on the other side. 33 But a Samaritan, as he travelled, came where the man was; and when he saw him, he took pity on him. 34 He went to him and bandaged his wounds, pouring on oil and wine. Then he put the man on his own donkey, brought him to an inn and took care of him. 35 The next day he took out two denarii and gave them to the innkeeper. ‘Look after him,’ he said, ‘and when I return, I will reimburse you for any extra expense you may have.’

36 “Which of these three do you think was a neighbour to the man who fell into the hands of robbers?”

37 The expert in the law replied, “The one who had mercy on him.”

Jesus told him, “Go and do likewise.”

So what does this very well-known parable teach us?

… and there are countless different interpretations that might come to mind.

In fact, I think it’s fair to say that this parable has been defined as containing the essence of Christianity. So we would expect lots of different takes on it, especially when the parable is lifted out of Luke’s Gospel and presented on its own terms.

Unfortunately, that inevitable process of extracting – and then analysing – removes the parable from its context and, as a result interpretation can go awry.

It is important that the parable is framed with Jesus’ engagement with the lawyer.

That supplies the immediate context which should direct the interpretation of the parable.

The lawyer asked: “What must I do to inherit eternal life?”

Lots of people ask the question like that these days and those who don’t ask maybe sometimes wish they could ask!

We want to hear a resounding ‘YES!’ to the question, but we maybe fear we won’t. Please tell me it will all be okay in the end.

Yes it will all be okay in the end, but you are required to be moved to action.

We all have a tendency to pay heed to the rules whether we’re abiding by them or deciding to break them.

The lawyer in the story loved the rules. The law code and his adherence to it meant everything to him. He was very happy to journey down the road of the law – the rules – with Jesus. He was comfortable on that road so, when Jesus told him a story about another road (the road from Jerusalem to Jericho), he no doubt became very unsettled.

The poor man in the parable who journeyed on that road would have expected a safe journey in his own country, with his own people; the people of the law, looking out for him.

But his adherence to these things left him bloodied and near dead by the side of the road. His fellow countrymen: ambassadors of the law – the rules – passed by on the other side and left him for dead.

Reliance on rules and procedures to guide and sustain will ultimately lead to breakdown and abandonment.

Christianity is not about an adherence to instructions for that would make the gospel, the good news of God, law.

The Gospel is not law; it is life delivered through the mercy of God reflected in human kindness – more than that, a kindness that stuns us, that calls us up short, just like God’s.

In February 2012, Cory Weissman led out the men’s basketball team of Gettysburg College.

It was their last game of the season.

Four years earlier, he had suffered a stroke that left him paralysed down one side.

Four years of rehab and he was able to walk with a limp, but was still not able to play competitively. But, before his stroke, he had been on the varsity team and the Gettysburg coach wanted to give him a few seconds on court as a senior.

So Cory was nominated captain and led out the starting five for what was both his first and last game for Gettysburg – for he was now due to graduate.

Knowing the struggle it was just to be there, the crowd and the players from both teams greeted him with wild applause. The Gettysburg coach gave him a few minutes on court before benching him.

With one minute to go Gettysburg, was well ahead and the coach sent Cory back out on court. The Washington coach called time out and instructed his players to foul Cory Weissman. For those who don’t know basketball, this was a very generous act, for it meant Cory would be given two shots at the basket.

Cory takes his place at the free throw line, feels the weight of the ball in his hands, lifts and shoots. It misses badly.

But he has a second and final shot left. Again, he feels the weight of the ball in his hands, lifts and shoots. This time the ball flies straight through the hoop, and the crowd breaks out in thunderous applause.

The assistant vice president for athletics at Gettysburg, David Wright, later wrote to Washington College: “Your coach, Rob Nugent, along with his staff and student-athletes, displayed a measure of compassion that I have never witnessed in over 30 years of involvement in intercollegiate athletics.”

Nugent didn’t have to show kindness.

It wasn’t a part of the laws of the game for most teams but it was for Nugent and his team.

The game would cease to be real without kindness. The rules would not make any sense without kindness. It needed to be shown – unexpectedly and outrageously – to many. This is to be the Christian distinctive in all of life.

Isn’t it incredible that when Jesus asked the lawyer, “who was the neighbour” in the parable, the lawyer could not bring himself to say the simple words, “the Samaritan”? Instead he said; “The one who showed him kindness.” It was so outrageous that a Samaritan could act in this way, the pious Jew could not even utter his identity.

Ahmed Khatib a Palestinian boy, aged 12, was shot by an Israeli soldier in November 2005.

The toy gun he was waving was allegedly presumed to be a real one.

Khatib was taken to an Israeli hospital in Haifa, but the doctors were unable to save his life.

After his death, his parents donated four of his organs to four Jewish and two Arab citizens of Israel.

Ehud Olmert, an Israeli politician, called Ahmed’s father, Ismail, extended his condolences and invited him to visit his office in Jerusalem.

Ismail said: “I will go if it will promote peace. I will tell him one thing: children have nothing to do with this conflict.”

Stunning, outrageous kindness that challenges the world to listen to God: to listen to Jesus who told a story about a man who was left for dead on a road.

Do we still hear the story?

If we do, are we living the story each day? 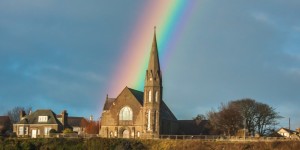