You are here: Home / Sermons / Why the gospel of Jesus Christ is offensive

This is the virtual service for the Third Sunday after Epiphany – 24 January 2021.

Rev. Geoff McKee’s sermon is based on the passage from Mark. Geoff discusses two topics we will often try hard to avoid – especially together – politics and religion.

Below you will find the main scripture, a video with the 4 readings, prayers and the sermon – and a Scottish-flavoured musical selection chosen by Kath to finish up.

Main scripture for this week

Mark 1:14-20 (New International Version)
Jesus Announces the Good News
14 After John was put in prison, Jesus went into Galilee, proclaiming the good news of God. 15 “The time has come,” he said. “The kingdom of God has come near. Repent and believe the good news!”

Jesus Calls His First Disciples
16 As Jesus walked beside the Sea of Galilee, he saw Simon and his brother Andrew casting a net into the lake, for they were fishermen. 17 “Come, follow me,” Jesus said, “and I will send you out to fish for people.” 18 At once they left their nets and followed him.

19 When he had gone a little farther, he saw James son of Zebedee and his brother John in a boat, preparing their nets. 20 Without delay he called them, and they left their father Zebedee in the boat with the hired men and followed him.

“The Summons” or Will you come and follow me?, was composed by John Bell and set to the Scottish tune, Kelvingrove. The first four verses have questions which are in Jesus’ voice, and the fifth verse is the singer’s response to them. The hymn is based on Mark 1:16–20 which refers to Jesus calling his disciples to follow him. 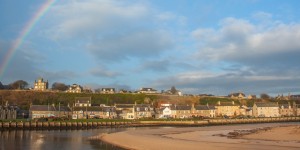 Below you will find Genesis 9:8-17 and then the video service with prayers, readings and the sermon. Finally, there is Kath Robertson’s musicial selection for this week.