You are here: Home / Sermons / Why Christian service is not an optional activity

For Transfiguration Sunday (03 March 2019), Rev. Geoff McKee explains why the Transfiguration story in Luke’s gospel must be read together with the immediately-following story of Jesus healing a demon-possessed boy. This allows us to see the underlying message of “transformed service”: why Christian service is not an optional activity. Do we have the vision to see how the Transfiguration takes us into the public square to see unimagined possibilities? Can we manage to serve others before our own egos?

Luke 9:28-43 (New International Version)
The Transfiguration
28 About eight days after Jesus said this, he took Peter, John and James with him and went up onto a mountain to pray. 29 As he was praying, the appearance of his face changed, and his clothes became as bright as a flash of lightning. 30 Two men, Moses and Elijah, appeared in glorious splendour, talking with Jesus. 31 They spoke about his departure, which he was about to bring to fulfilment at Jerusalem. 32 Peter and his companions were very sleepy, but when they became fully awake, they saw his glory and the two men standing with him. 33 As the men were leaving Jesus, Peter said to him, “Master, it is good for us to be here. Let us put up three shelters—one for you, one for Moses and one for Elijah.” (He did not know what he was saying.)

34 While he was speaking, a cloud appeared and covered them, and they were afraid as they entered the cloud. 35 A voice came from the cloud, saying, “This is my Son, whom I have chosen; listen to him.” 36 When the voice had spoken, they found that Jesus was alone. The disciples kept this to themselves and did not tell anyone at that time what they had seen.

Jesus Heals a Demon-Possessed Boy
37 The next day, when they came down from the mountain, a large crowd met him. 38 A man in the crowd called out, “Teacher, I beg you to look at my son, for he is my only child. 39 A spirit seizes him and he suddenly screams; it throws him into convulsions so that he foams at the mouth. It scarcely ever leaves him and is destroying him. 40 I begged your disciples to drive it out, but they could not.”

41 “You unbelieving and perverse generation,” Jesus replied, “how long shall I stay with you and put up with you? Bring your son here.”

42 Even while the boy was coming, the demon threw him to the ground in a convulsion. But Jesus rebuked the impure spirit, healed the boy and gave him back to his father. 43 And they were all amazed at the greatness of God.

I remember very well the first public examination that I sat at school.

It was my ‘O’ level French aural comprehension exam.

The pupils listened to a recording of a story in French and then were asked to turn over a question paper that asked questions in English about the recorded material. So we all nervously listened to the recording and then set about answering the questions.

I was pleased because I knew the answers – or thought I did, because I was awoken from my wee bubble of concentration by a sharp smack over the head.

My French teacher who was also invigilating had noticed a silly error in my answer as he was walking past and had decided that a sharp wake up was needed.

It was naughty of him and no doubt wouldn’t happen these days but it did the job in jolting me from my confidence bubble.

When reading the Gospel story today, I always feel that Peter received the verbal equivalent of a clip around the ears.

He misread the situation so badly and there is no doubt that his future relationship with Jesus took some time to right itself after this.

Some have read the Transfiguration story as an account that has found itself in the wrong part of the Gospel record. Here is a story that fits perfectly with the resurrection stories and for some reason it has been shunted forwards for effect. We have Jesus shining as if he had been resurrected and we have sleepy disciples just as they would be in Gethsemane when Jesus prepared for his glory.

I think the view is somewhat forced however.

It is true that the story of the Transfiguration was written after the resurrection appearances of Jesus and so like all Gospel writing was profoundly influenced by the resurrection.

In fact, the account of the distressed man and his child that follows directly on is offered as a challenge to the church, through the failure of the disciples to act appropriately, to listen to Jesus. People who take the reality of the resurrection of Jesus seriously listen to Jesus.

The meeting with Moses and Elijah on the mountaintop may appear to be a random one.

There may have been a list of appropriate Old Testament greats who would have done just as well.

But no – Moses and Elijah were chosen because they represented the Law and Prophetic tradition in Israel equally.

Both characters were defined by their journeys to the land or through the land in God’s service. They were both involved in exodus journeys, Moses explicitly so and Elijah in the sense he was always on the way, ultimately to glory.

So Jesus met with the two great travellers and identified his mission closely with theirs. Peter seems to have picked up something of this when he offered to make three tabernacle dwellings for them. These were temporary abodes particularly suited to the sojourner. Once that idea was rejected Jesus and his followers journeys back down the mountain with God’s instruction ringing in their ears, ‘listen to him’. This, they immediately failed to do, as they were unable to cope with the afflicted child.

They had failed to understand that seeing Jesus differently must affect the way they see others too. They, themselves, must allow the transformed Jesus to transform them in turn.

Heidi Neumark, in her memoir Breathing Space: A Spiritual Journey in the South Bronx, detailed the transformation of the church she served for almost twenty years.

The church was struggling, barely surviving, when she arrived.

Standing amid poverty and the myriad problems that can accompany such a demon – crime, drug abuse, lack of education and opportunity, lack of hope – the church mostly kept its doors shut tight to the world around it.

The work of Jesus rebuking the unclean spirit was example enough for Heidi Neumark. “When Peter and the others came down the mountain,” she wrote, “they found a father and a child gasping for life. But Jesus rebuked the unclean spirit, healed the boy, and gave him back to his father. And they found transfiguration. And so it is. When the disciples of this Bronx church unlocked the doors of their private shelter and stepped out into the neighbourhood, they did meet the distress of the community convulsed and mauled by poverty. But they also discovered transfiguration as a congregation in connection with others.”

It’s very important that the story of the meeting with the child and his father is read along with the mountaintop experience.

Genoa, the city of his birth. But only on condition that the instrument would never be played.

It was an unfortunate condition, for it is a peculiarity of wood that, as long as it is used and handled, it shows little wear.

As soon as it is discarded, it begins to decay. The exquisite, mellow-toned violin has become worm-eaten in its beautiful case, valueless except as a relic.

The decaying instrument is a reminder that a life withdrawn from all service to others loses its meaning.

Service is not an optional activity.

Furthermore, how we serve matters.

Richard Foster – in his important book, Celebration of Discipline – elaborates on the significant differences between serving one’s own ego and serving others.

It was the building of the community of the risen Christ to serve the world that God’s Spirit was about, as Jesus and his disciples came down the mountain.

To this day, God remains committed in Christ to the same enterprise. 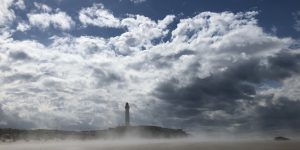