You are here: Home / Sermons / The gospel of Jesus Christ – for all nations and races

Rev. Geoff McKee has Acts 10:44-48 as his Scripture for the sixth Sunday of Easter (06 May 2018). This passage makes clear that “the unstoppable gospel of Jesus Christ is for all nations and for all races.”

Acts 10:44-48 (New International Version)
44 While Peter was still speaking these words, the Holy Spirit came on all who heard the message. 45 The circumcised believers who had come with Peter were astonished that the gift of the Holy Spirit had been poured out even on Gentiles. 46 For they heard them speaking in tongues and praising God.

Then Peter said, 47 “Surely no one can stand in the way of their being baptised with water. They have received the Holy Spirit just as we have.” 48 So he ordered that they be baptised in the name of Jesus Christ. Then they asked Peter to stay with them for a few days.

I read the following recently in a blog article about racism in the Church.

“It isn’t exactly evidence of great insight, though, to say that “racism is wrong”. The more urgent question is: why is racism so persistent in human societies? Why, when we know the devastation that racism can wreak, is prejudice against someone on the basis of race or ethnicity something that is so casually evident?

Let me put it more pointedly: why is it that, even though I know that racism is terrible, I still find within my own heart evidence of racist assumptions? I still assume, pretty much, that white guys should be in charge of most things. And, as the flipside, I do catch myself suspecting the motives of people who are not like me. Typical, I catch myself thinking, they can’t control their kids. They are always stealing. They are all corrupt. They breed like rabbits.”

“Even though I know that racism is terrible…”

The Holy Spirit has been working on humanity for two thousand years, placing within most of humanity a deep-seated unease with racism.

Peter was in no doubt that God was racist.

After all, he was a member of God’s chosen people.

However, unknown to Peter at that time, God’s Spirit had something other than segregation in mind for the new Church.

Acts of the Apostles is the most inappropriately named book in the New Testament canon of Scripture. It should be named the Acts of the Spirit, because that’s who the boss is! Peter, an apostle, was to find out – in rather shocking terms – that the Spirit had very different ideas to his…

It’s almost as if today the congregation has walked in at the end of the movie, in relation to the Acts passage.

Significant events have happened and this short passage is the culmination of these events.

So, what has happened?

Well, the reader has been introduced to Cornelius, a Roman centurion and God-fearer who needs to find answers.

Peter then has the scariest dream he has ever experienced. A large sheet full of lots of unclean dead animals is presented to the famished Peter and he is invited to eat. How shocking for him!

Then visitors arrive summoning him to Cornelius’ home where it dawns on him what the meaning of the animals’ vision is – and he is able to declare to Cornelius that God is making it clear that nothing, whether animal or human, should ever be declared unclean again.

It’s at that point that our text begins today.

Peter begins an eloquent exposition of what is happening when God’s Spirit butts in and the gathered Gentiles burst out in ecstatic praise to God. God’s interruption is a reminder that God is the subject of salvation and not Peter or any other human being.

All of us have heard of Desmond Tutu, but few of us will know who Trevor Huddleston is.

Yet without Trevor Huddleston, there may have been no anti-apartheid leader named Tutu.

Asked by the BBC to identify the defining moment in his life Desmond Tutu spoke of the day he and his mother were walking down the street.

Tutu was nine years old. A tall white man dressed in a black suit came towards them. In the days of apartheid, when a black person and a white person met while walking on a footpath, the black person was expected to step into the gutter to allow the white person to pass and nod their head as a gesture of respect. But this day, before a young Tutu and his mother could step off the sidewalk, the white man stepped off the sidewalk and, as his mother and he passed, tipped his hat in a gesture of respect to her!

The white man was Trevor Huddleston, an Anglican priest who was bitterly opposed to apartheid.

So what do we learn today?

We learn that the tradition must be passed on.

The unstoppable gospel of Jesus Christ is for all nations and for all races.

There is no allowance made for Christians to make decisions over who should be permitted to hear and to respond to the good news. It is good news for all of humanity.

Also, we learn that the tradition is not static.

We have to be open to the way in which the tradition might come alive in new days.

Peter was never in a position to see what was coming. His mind was entirely closed to the Spirit in that respect. It took an incredible shock to jolt him into a new way of thinking. I somehow suspect that we are no different and that we will need similar jolts in our day.

On a bitterly cold January day several years ago, five-year-old Jimmy Tonglewicz chased a sled onto the glazed ice of Lake Michigan.

In a blink of the eye he disappeared beneath the ice.

The last words his dad heard were: “Save me, Dad!”

Jimmy’s panic-stricken father plunged into the freezing water, but the cold quickly rendered him helpless and he left the scene in an ambulance.

For over twenty minutes Jimmy remained submerged beneath the icy waters.

When his limp, lifeless body was pulled from the lake by divers, he had no pulse. But he had a lot going for him–especially the cold water. Scientists call what happened the “mammalian diving reflex.”

The shock of the cold water allowed Jimmy to live without breathing an abnormally long time. Slowly he came around, and today Jimmy lives a normal life.

Wee Jimmy would not have known what hit him. Likewise for Peter it would only be much later when he had time to think that he would have realised the enormity of what he had been part of.

Our lives are like that because it can be difficult to keep up with the Spirit.

In the weeks to come, we will reflect more on that as Pentecost approaches.

May God continue to surprise us and bless us. 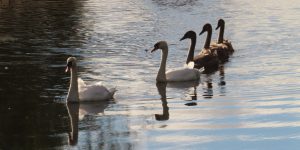 The version set out below is taken from The Message, rather than the usual ‘New International Version’ (of the Bible), for a bit of variety. The version read in the service (video link to recording, below) is from the NIV version, as usual.

Should you wish to download the sermon as a PDF, a version is available at the link here.

Below, you will find the main scripture for this week, the Order of Service, the Video of the Service led by Rev. Geoff McKee, and a Musical Selection by Katherine Robertson, with an interesting local, Moray connection.