You are here: Home / Sermons / Facing tragedy and finding a way through

Genesis 37:12-28
Joseph Sold by His Brothers
12 Now his brothers had gone to graze their father’s flocks near Shechem, 13 and Israel said to Joseph, “As you know, your brothers are grazing the flocks near Shechem. Come, I am going to send you to them.”

14 So he said to him, “Go and see if all is well with your brothers and with the flocks, and bring word back to me.” Then he sent him off from the Valley of Hebron.

When Joseph arrived at Shechem, 15 a man found him wandering around in the fields and asked him, “What are you looking for?”

16 He replied, “I’m looking for my brothers. Can you tell me where they are grazing their flocks?”

So Joseph went after his brothers and found them near Dothan. 18 But they saw him in the distance, and before he reached them, they plotted to kill him.

19 “Here comes that dreamer!” they said to each other. 20 “Come now, let’s kill him and throw him into one of these cisterns and say that a ferocious animal devoured him. Then we’ll see what comes of his dreams.”

23 So when Joseph came to his brothers, they stripped him of his robe—the ornate robe he was wearing— 24 and they took him and threw him into the cistern. The cistern was empty; there was no water in it.

25 As they sat down to eat their meal, they looked up and saw a caravan of Ishmaelites coming from Gilead. Their camels were loaded with spices, balm and myrrh, and they were on their way to take them down to Egypt.

26 Judah said to his brothers, “What will we gain if we kill our brother and cover up his blood? 27 Come, let’s sell him to the Ishmaelites and not lay our hands on him; after all, he is our brother, our own flesh and blood.” His brothers agreed.

28 So when the Midianite merchants came by, his brothers pulled Joseph up out of the cistern and sold him for twenty shekels of silver to the Ishmaelites, who took him to Egypt.

Psalm 105:1-6
1 Give praise to the Lord, proclaim his name;
make known among the nations what he has done.
2 Sing to him, sing praise to him;
tell of all his wonderful acts.
3 Glory in his holy name;
let the hearts of those who seek the Lord rejoice.
4 Look to the Lord and his strength;
seek his face always.

5 Remember the wonders he has done,
his miracles, and the judgments he pronounced,
6 you his servants, the descendants of Abraham,
his chosen ones, the children of Jacob.

Psalm 105:16-22
16 He called down famine on the land
and destroyed all their supplies of food;
17 and he sent a man before them—
Joseph, sold as a slave.
18 They bruised his feet with shackles,
his neck was put in irons,
19 till what he foretold came to pass,
till the word of the Lord proved him true.
20 The king sent and released him,
the ruler of peoples set him free.
21 He made him master of his household,
ruler over all he possessed,
22 to instruct his princes as he pleased
and teach his elders wisdom.

Psalm 105:45
45 that they might keep his precepts
and observe his laws.

Romans 10:5-15
5 Moses writes this about the righteousness that is by the law: “The person who does these things will live by them.” 6 But the righteousness that is by faith says: “Do not say in your heart, ‘Who will ascend into heaven?’” (that is, to bring Christ down) 7 “or ‘Who will descend into the deep?’” (that is, to bring Christ up from the dead). 8 But what does it say? “The word is near you; it is in your mouth and in your heart,” that is, the message concerning faith that we proclaim: 9 If you declare with your mouth, “Jesus is Lord,” and believe in your heart that God raised him from the dead, you will be saved. 10 For it is with your heart that you believe and are justified, and it is with your mouth that you profess your faith and are saved. 11 As Scripture says, “Anyone who believes in him will never be put to shame.” 12 For there is no difference between Jew and Gentile—the same Lord is Lord of all and richly blesses all who call on him, 13 for, “Everyone who calls on the name of the Lord will be saved.”

Matthew 14:22-33
Jesus Walks on the Water
22 Immediately Jesus made the disciples get into the boat and go on ahead of him to the other side, while he dismissed the crowd. 23 After he had dismissed them, he went up on a mountainside by himself to pray. Later that night, he was there alone, 24 and the boat was already a considerable distance from land, buffeted by the waves because the wind was against it.

27 But Jesus immediately said to them: “Take courage! It is I. Don’t be afraid.”

Then Peter got down out of the boat, walked on the water and came toward Jesus. 30 But when he saw the wind, he was afraid and, beginning to sink, cried out, “Lord, save me!”

31 Immediately Jesus reached out his hand and caught him. “You of little faith,” he said, “why did you doubt?”

32 And when they climbed into the boat, the wind died down. 33 Then those who were in the boat worshiped him, saying, “Truly you are the Son of God.”

The life I now live is not my life, but the life which Christ lives in me. Galatians 2: 20

Faithful God, although physically apart we gather together by your Spirit this morning, in Your presence. We come as we are, some full of faith and others who are not sure what to believe. We come because you have called us, because you love us, because you are our God. We come, not because we are good or pure or holy, but because of our need.

Forgive us, Lord God, and renew us to be your people. Make us one, and reassure us in our true identity as children of the One who is above all things. For we pray this in the name of Jesus Christ, our faithful and forgiving friend.
Amen

NOTE: The above audio is in mp3 format and is also downloadable, if you wish to listen at a time when you may not have a reliable internet connection. Other devices are available but, on a PC, for example, if you right-click on the 3 vertical dots at the right side of the audio player, the drop-down menu should offer the option to “Save as…”

Before the world began, you loved us. Before you had created us, you were faithful to us. And we, as your people, are thankful for your great and abiding love, shown again and again down the ages. You have never abandoned us, even when we have abandoned you. You have never forgotten us, even when we have strayed far from the path. We praise you, faithful God, for the steadfast love which has always guided us, for the promise which has never faltered, for the light which has lightened our way, for the story which has reminded us of those who came before us. For your steadfast love and mercies new with each morning.

We pray for those in need today, may you draw near and bring your comfort, healing and strength for the sake of Jesus Christ our Lord, who taught us to pray…

The Lord’s Prayer
Our Father, who art in heaven,
hallowed be thy name;
thy kingdom come;
thy will be done;
on earth as it is in heaven.
Give us this day our daily bread.
And forgive us our debts,
as we forgive our debtors
And lead us not into temptation;
but deliver us from evil.
For thine is the kingdom,
the power and the glory,
for ever.

This hymn came about from an incident at one of Moody’s revival meetings in 1887. A young man who had just given his life to Jesus, stood up to testify about his confidence of salvation. He humbly said, “I am not quite sure – but I am going to trust and obey.’

The music director Professor Towner, was present at the meeting when these words were uttered. Based on the words trust and obey, Professor Towner with the help of John Sammis, who developed the lyrics, composed the music to this hymn – When we walk with the Lord. This hymn is a much loved golden oldie with a very clear message and is sung in many languages across the world. 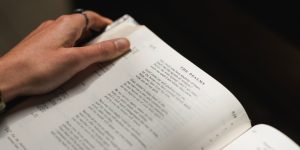