There will be a Christmas Praise concert in the church at St James’ on Sunday 15 December at 2.30pm.

This will include carol singing for all and various choir items.

Refreshments will be available in the church hall afterwards.

Please come and join us for a time of praise and fellowship.

This is the sermon for Remembrance Sunday 2019 (10 November 2019). Rev. Geoff McKee’s scripture is the story from John’s Gospel of how the disciple, Thomas, would only believe in Jesus’s resurrection by meeting Jesus face-to-face.

You can download a PDF of the sermon, if you wish, by clicking HERE.

24 Now Thomas (also known as Didymus), one of the Twelve, was not with the disciples when Jesus came. 25 So the other disciples told him, “We have seen the Lord!”

But he said to them, “Unless I see the nail marks in his hands and put my finger where the nails were, and put my hand into his side, I will not believe.”

26 A week later his disciples were in the house again, and Thomas was with them. Though the doors were locked, Jesus came and stood among them and said, “Peace be with you!” 27 Then he said to Thomas, “Put your finger here; see my hands. Reach out your hand and put it into my side. Stop doubting and believe.”

29 Then Jesus told him, “Because you have seen me, you have believed; blessed are those who have not seen and yet have believed.”

The Purpose of John’s Gospel

30 Jesus performed many other signs in the presence of his disciples, which are not recorded in this book. 31 But these are written that you may believe that Jesus is the Messiah, the Son of God, and that by believing you may have life in his name.

One of the great challenges which a newly ordained minister has to come to terms with, and continually live with, is coping with funerals.

They are a necessary part of the vocation.

Their occurrence is unpredictable and so they can’t be planned for.

There is much work that needs to be done in visiting and preparation as well as managing the pressures of the service itself and any required follow-up.

How foolish the minister who does not pause to reflect on the impact of this work because it has the potential to bring emotional and spiritual challenges that can enrich a ministry or destroy it.

I have visited the cemetery in Lossiemouth about two hundred times in the past five years.

I have watched it steadily expand and I often reflect that as more and more land is claimed for sacred use so more lives are impacted by the blow of loss and the journey of mourning. END_OF_DOCUMENT_TOKEN_TO_BE_REPLACED

For Harvest Thanksgiving (13 October 2019), Rev. Geoff McKee has the story of Naboth’s Vineyard from the Book of Kings as the scripture and he looks at a particular project of Christian Aid – EcoVeg – which (like the prophet Elijah in the Bible story) speaks truth to the powers that seek to marginalise and exclude in India today.

1 Kings 21 (New International Version)
Naboth’s Vineyard
21 Some time later there was an incident involving a vineyard belonging to Naboth the Jezreelite. The vineyard was in Jezreel, close to the palace of Ahab king of Samaria. 2 Ahab said to Naboth, “Let me have your vineyard to use for a vegetable garden, since it is close to my palace. In exchange I will give you a better vineyard or, if you prefer, I will pay you whatever it is worth.”

3 But Naboth replied, “The Lord forbid that I should give you the inheritance of my ancestors.”

4 So Ahab went home, sullen and angry because Naboth the Jezreelite had said, “I will not give you the inheritance of my ancestors.” He lay on his bed sulking and refused to eat.

5 His wife Jezebel came in and asked him, “Why are you so sullen? Why won’t you eat?”

6 He answered her, “Because I said to Naboth the Jezreelite, ‘Sell me your vineyard; or if you prefer, I will give you another vineyard in its place.’ But he said, ‘I will not give you my vineyard.’”

7 Jezebel his wife said, “Is this how you act as king over Israel? Get up and eat! Cheer up. I’ll get you the vineyard of Naboth the Jezreelite.”

8 So she wrote letters in Ahab’s name, placed his seal on them, and sent them to the elders and nobles who lived in Naboth’s city with him. 9 In those letters she wrote:

“Proclaim a day of fasting and seat Naboth in a prominent place among the people. 10 But seat two scoundrels opposite him and have them bring charges that he has cursed both God and the king. Then take him out and stone him to death.”

11 So the elders and nobles who lived in Naboth’s city did as Jezebel directed in the letters she had written to them. 12 They proclaimed a fast and seated Naboth in a prominent place among the people. 13 Then two scoundrels came and sat opposite him and brought charges against Naboth before the people, saying, “Naboth has cursed both God and the king.” So they took him outside the city and stoned him to death. 14 Then they sent word to Jezebel: “Naboth has been stoned to death.”

“I have found you,” he answered, “because you have sold yourself to do evil in the eyes of the Lord. 21 He says, ‘I am going to bring disaster on you. I will wipe out your descendants and cut off from Ahab every last male in Israel—slave or free. 22 I will make your house like that of Jeroboam son of Nebat and that of Baasha son of Ahijah, because you have aroused my anger and have caused Israel to sin.’

23 “And also concerning Jezebel the Lord says: ‘Dogs will devour Jezebel by the wall of[ Jezreel.’

25 (There was never anyone like Ahab, who sold himself to do evil in the eyes of the Lord, urged on by Jezebel his wife. 26 He behaved in the vilest manner by going after idols, like the Amorites the Lord drove out before Israel.)

28 Then the word of the Lord came to Elijah the Tishbite: 29 “Have you noticed how Ahab has humbled himself before me? Because he has humbled himself, I will not bring this disaster in his day, but I will bring it on his house in the days of his son.”

We live in a world where people are hungry for power and control.

So often, those in authority are tempted to abuse their position to gain control.

In the story in the book of Kings, his words set the actions in motion, yet he was in many ways a passive participant.

Jezebel held something of a “middle-manager” role, to parallel the image that Jesus used in the Gospel story that we are now quite familiar with: she appeared to be the most active and influential in directing the course of events.

Naboth was affected by the actions of the more powerful in society.

The choir will be giving a concert on Friday 4th October in St James Church at 7.30pm.

Tickets are £5.00 and are available from choir members, Buckley’s newsagents or you can pay at the door.

The choir will be singing a wide variety of songs: religious, non-religious, Scottish, German, light pop…

This is a pre-tour concert before the choir leave to sing in Donaueschingen in the south of Germany.

We do hope you can come to support us.

A choir of 40 from Donaueschingen in the Black Forest area will be performing at St James’ Church.

The concert takes place on Friday 30th August at 7.30pm.

Tickets are available from Katherine Robertson (via this website), Buckley’s Post Office and Unique. The tickets cost £5 each.

The choir are performing a wide variety of songs which will be sung mostly in English. The programme includes religious music, songs from musicals, folk and light popular music. 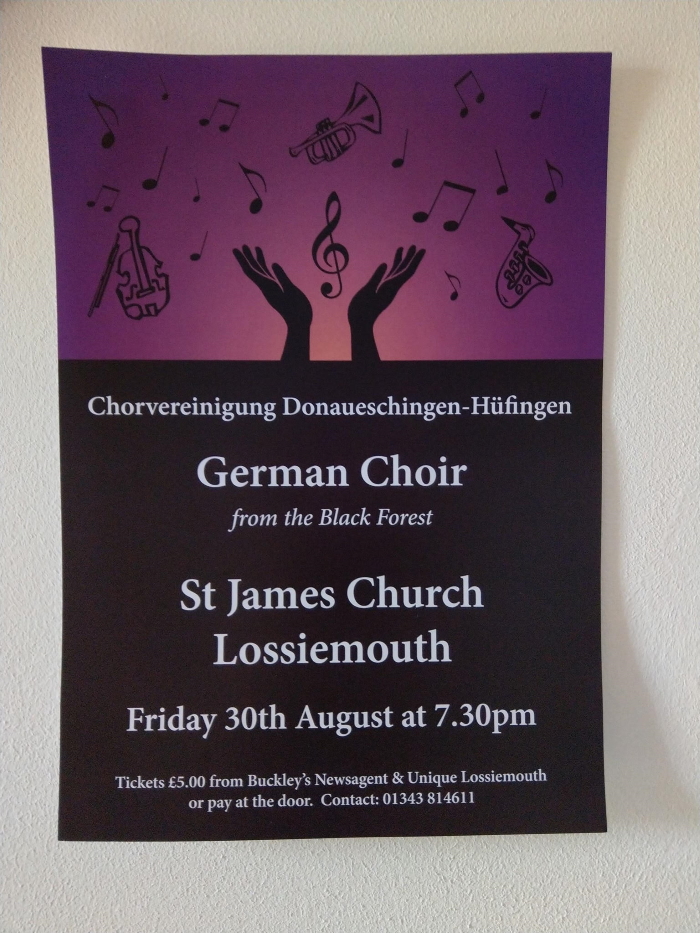 There will be a Christmas Praise concert in the church at St James’ on Sunday 15 December at 2.30pm.

This will include carol singing for all and various choir items.

Refreshments will be available in the church hall afterwards.

Please come and join us for a time of praise and fellowship.