You are here: Home / Sermons / An Income-generating Strategy you won’t find in any Economics textbook

Here is our Service for 27 June 2021, the Fifth Sunday after Pentecost.

The main Lectionary reading is from Paul’s (New Testament) Second Letter to the Corinthians. Following the death and resurrection of Jesus, the Corinthian Church is a young church which Paul seeks to encourage and guide. This passage focuses on Stewardship – i.e. trying to answer ‘difficult’ questions such as “How much should we give?” and “What is a fair balance?”

A foundational part of Paul’s apostolic ministry was raising funds for the poor in Jerusalem. Collecting money in this way did not simply address some very real economic needs (Jewish congregations tended to be poorer than their gentile counterparts); it also served to strengthen unity and reconciliation between Jewish and gentile Christians.

Paul’s recommended income-generating strategy might be said to be unorthodox. But, as explained in Geoff’s sermon, it’s not, when viewed through the lens of Christianity.

Read on for the main Scripture, then the video service by Rev. Geoff McKee featuring readings, prayers and the sermon. Finally, as usual, there is a Musical Selection by Kath this week referencing the fact that the service is one of Holy Communion.

The main reading for this week

2 Corinthians 8:7-15 (New International Version)
7 But since you excel in everything—in faith, in speech, in knowledge, in complete earnestness and in the love we have kindled in you—see that you also excel in this grace of giving.

8 I am not commanding you, but I want to test the sincerity of your love by comparing it with the earnestness of others. 9 For you know the grace of our Lord Jesus Christ, that though he was rich, yet for your sake he became poor, so that you through his poverty might become rich.

13 Our desire is not that others might be relieved while you are hard pressed, but that there might be equality. 14 At the present time your plenty will supply what they need, so that in turn their plenty will supply what you need. The goal is equality, 15 as it is written: “The one who gathered much did not have too much, and the one who gathered little did not have too little.”

This Sunday we are so thankful to be celebrating holy communion once again.

The hymn “Behold the Lamb” was written by Suart Townend, and Keith and Kirstyn Getty.

Whilst writing some of the lyrics, certain ideas crystallised in the mind of Stuart Townend and he makes the following comments about that –

“Three aspects of communion became clear: the act of remembering and celebrating Christ’s death through eating bread and drinking wine; the expression of being one in Christ through sharing in one bread and one cup; and the proclamation of Christ’s return. In my experience, churches usually focus EITHER on the first OR the second – and hardly ever the third! So, I wanted to create a song that helped us keep in mind the full picture of what Communion represents.” 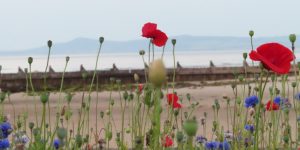 We continue our journey through the New Testament book of Ephesians on this the Tenth Sunday after Pentecost, 01 August 2021.

The main text for today is Ephesians 4:1-16 – Paul’s words to the Church in Ephesus about the importance of unity in the Church. This is as resonant for the modern Church as it was 2000 years ago and yet much of the intervening history of the Christian Church has been of fracturing and disunity.

Below you will find the main Scripture, the Order of Service for today and then the embedded YouTube video recording of the service conducted by Rev. Geoff McKee – prayers, readings, hymns and the sermon.